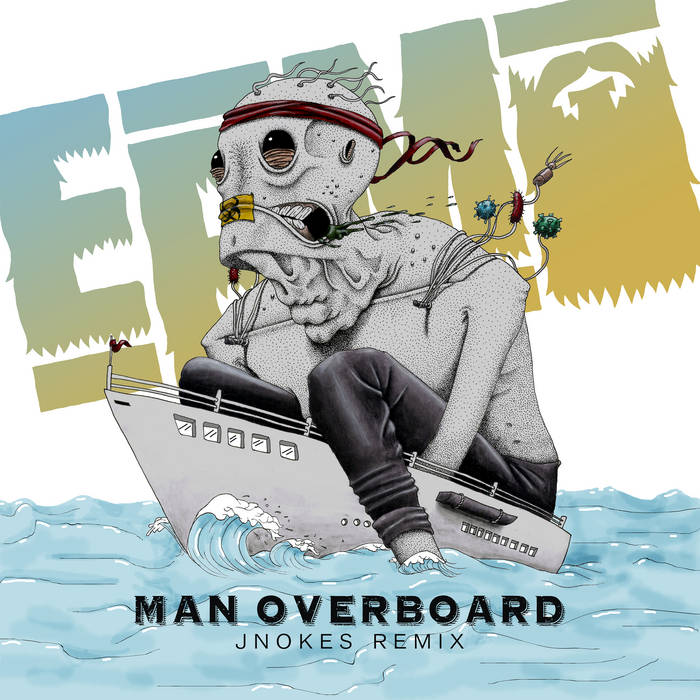 To celebrate the one year anniversary of Epic Beard Mean's "This Was Supposed to be Fun" album, we're invoking the spirit of the Judgment Night soundtrack with a rock-infused remix of "Man Overboard" by JNokes (artwork by Charbel Abuxapqui.) There's been lots of judgment going around lately, so the theme of cruise ships being a floating petri dishes seems apropos. Not only have Sage Francis and B. Dolan had to cancel their respective tours for 2020, but karaoke night has also been cancelled for tonight, folks. In place of all these cancellations we'll do our best to keep providing you content and entertainment of various sorts via the SFR channels, so stay tuned, stay safe, and stay sane out there.

This Was Supposed To Be Fun dropped on all streaming and digital services on March 29, 2019. Physical versions of the album (Colored Vinyl LP, CD, Cassette) can be ordered now at www.strangefamousrecords.com/news/twstbf/

This Was Supposed to Be Fun, the debut LP (and second ofﬁcial offering) from EPIC BEARD MEN, is an indie-rap tour de force by two of the underground's ﬁnest; SAGE FRANCIS and B. DOLAN. This album knocks. It parties with disreputable outlaws in truck stops. It blends the classic sounds of breakbeats and timeless drum machines with soul grooves and sub bass. Guitars, violins, and a goddamn brass band have sat in before the party's over. On the vocal side of things, more than a few lyrical heavyweights drop in to take their turn on the mics.

Throughout 50 minutes of intricately produced rap music, the duo of storied rapper/poets wander freely and set ﬁres like the latchkey kids they once were. This Was Supposed to Be Fun, but that doesn't mean either emcee has shied away from their signature blend of the personal and political; topics range from the absurd to the unshakably true. EBM are two rap greybeards who aren't afraid to swing freely from dead-serious to wryly hilarious.

“Hedges”, the first single, is a haunting character study in suburban alienation and the collapse of the psychic bonds that used to constitute the great American neighborhood. Sage and B take turns spitting the chorus, like they’re shouting across empty, manicured lawns. “Man Overboard” is the album’s ironic thesis statement, maybe a metaphor for America itself. The topical track isn’t exactly about the VIP Fyre Fest experience, but it’s about that kind of thing: You were sold a bill of goods. You expected a private island, a luxury jet, a view of the beach. Then the skies turned dark. The millionaires took the lifeboats and left. Instead of a sunny lagoon, you got dive-bombed by seagulls, rained on. You paid for Club Paradise; you got Lord of the Flies. The “Sand Dunes” are not a tropical beach or a hip-hop singles cruise, for fuck's sake. They’re the Sand Dunes out in the woods, past the Pet Cemetery. The sketchy kind of unwatched all-ages party spot where rival warlords go to fight.

Hailing from the industrial outskirts of Providence, Rhode Island, both artists are walking hip-hop vaults who ﬁddle with esoteric knowledge over hypnotic, sprawling sample compositions. For well over a decade, no matter how many tours they survived or solo releases they dropped — more than 20 between the two, depending how you count ‘em — the members of this dream team and their DIY Econoline ethic endured a certain outsider status in the rap world. Last year’s debut EP, Season 1, poked fun at that label, while still delivering a sublime buckshot blast of political commentary, interpersonal dispatches, and healthy introspection. Now the joke isn’t so funny anymore.

Epic Beard Men rap and produce like keepers of the ﬂame. They've clearly spent a few thousand hours excavating the crates during the creation of the album, fusing the treasures they've unearthed into the kind of dense hip-hop SONGS you haven’t heard much of since the sample-happy days of De La. TWSTBF is ﬁlled with sharp, satirical, bombastic edutainment, writ large in neon bubble letters for all the world to fuck off to.

This Was Supposed to Be Fun plays like a dark Buddy Comedy gone spectacularly sideways: the mighty Epic Beard Men are back in the barber chair, fuckin’ up your market share. You can’t tell them shit. The chill is gone. The chill was never here.

They told us "focus on the distance" to cope with the motion sickness.
Lower doses on prescriptions and tell us your known conditions.
Then smoke rose from the engines... we slowly noticed a difference
in the tone of those announcements, then the power started dipping.
"Hit the switch!" Which is right when faulty backup generator #6
Spit a fireball that nearly cleared the deck and killed a kid.
Kicking off a frantic stampede for the lifeboats
Panic at the information desk from guests in white robes,
each demanding V.I.P. exceptions get them flights home
but no hope was in sight for tourists trapped beneath the microscope
in a floating petri dish and leaky ship no one could quite tow.
Beneath a darkened chandelier we heard from our polite host:
"The Karoake Competition's cancelled for tonight, folks."
But all of that was years ago,
it turns out there's nowhere to go.
Down here we're all prepared to float
and let the current steer the boat...
and anyhow we've found a different type of Fun
cause if you hit the nightly lottery
your vacation is done.

The announcement said, “Don’t set yourself on fire to keep others warm. “
But the safety dance was underperformed. They looked our hands to write a song,
To save us all. From the Lord of the Flies. The Children of the Corn.
The captain bounced his last rain check during one heck of a thunderstorm.
Now Every red cent that you pinch attracts sharks 'cause they smell blood.
Do your best to escape without scratch marks from Hell's tub.
If you're the brash type who haggles, you don't deserve the upgrade.
Pack light when you travel. Water World isn't your runway.
Gotta greet the royals with a “Hail Satan!" And an “Amen!” And a "serf's up!"
And a "Hang ten!" That's when the hangman turns up. Like “worrrrrd up.”
Right now you might feel hurt but, this is an an unsafe spot.
So either stay put with one slave foot in the grave plot or take your shot.
New jacks have to inflate their muscles or they ain’t allowed in.
“Hustlers” so wet behind the ears they're always in danger of drowning.
Special spectacles of bloody passion. Ugly in action.
Take a picture and use a filter then hold a contest for the funny caption.
Criminal sketch comedy troupes are bound to cash in.
And they don't answer to anybody, buddy! Well, nobody's asking.
That’s the escape clause. We’re all hip to the lawyer speak.
Very slick with the PR, never actually clean up the oil leak.
Seriously, staying silent is a crime in certain instances.
Being a bystander doesn't grant you innocence. But listen to this.
Man overboard!
I see your effort, you're in trouble.
Man overboard!
I definitely recognize the struggle.
Man overboard!
But the lifeguard is off duty.
Man overboard!
And you're only lying in a puddle.
(Muthafu****, Stand up!)

Interviews With Butcher Brown and Slauson Malone, plus LP of the week by SAULT.